KOSHA is a Sanskrit word meaning ''sheath'' or ''dimension''

The concept of the Five (Pancha) Koshas comes from Vedanta. Vedanta is a system of knowledge based on the Upanishads - those writings which came after, and often interpreted, the earlier Vedas.

The Pancha Koshas is a concept that wrapped around the true Self or ''Atman'' are five energy layers, composed of different sheaths of vibratory prana. These range from the most dense and innermost layer of vibration (which is the Food Body) to the most subtle layer (which is the Blissful Body).

The Astral or Psychic (or Wisdom) Body is called Vigyanamaya Kosha.

Cosmic Prana is what enables these Koshas to function. This can be visualised as the all pervading atomic energy which bounces around the Universe, and moves in and out of us. The Koshas are affected by the Gunas - Sattwa (Balance and Tranquility), Rajas (Action, Violence) and Tamas (Inertia and Dullness) - and it is said that these Gunas determine the level of ''Bounce'' in this Universal Cosmic Prana that our Koshas can sustain. The Annamaya Kosha (Food Body) is the Physical Sheath of the body. It is dependent upon food, water and air, which are dense forms of prana. Without these it dies. If we care for our Annamaya Kosha with good food, and healthful living, we may progress with comfort to more subtle states of awareness. Yoga Asanas directly affect Annamaya Kosha and Pranamaya Kosha (Pranic Body) although it is said that what is beneficial for one Kosha beneficially affects all Koshas.  The yogic cleansing practices (Shatkriyas) also affect Annamaya Kosha.

(Refer for example to Neti - https://somathread.ning.com/groups/ayurveda/forum/neti-nasal-cleanse

both of which are Shatkriyas...)

The body, constituted of marrow, bone, fat, flesh, ligament and skin, and composed of feet, legs, chest, arms, back and head, is the seat of the "I" and "mine" delusion, and is known as the physical body by the wise, while space, air, fire, water and earth are the subtle elements.

The Pranamaya Kosha (Pranic Body) combines with the Food Body to create the basic human structure. The Pranamaya Kosha (Pranic Body) is more subtle than the Food Body and pervades and influences it. Breathing techniques (Pranayama) influence this sheath. It is the vital energy sheath which animates the physical body and supports the sense organs. It is composed of Five Pranas - Prana Vayu(from the diaphragm upwards to throat - an upward moving prana), Apana Vayu (from the navel to groin - a downward moving Prana), Samana Vayu ( a girdle of side to side moving prana in the middle of the body) Udana Vayu (which animates the head and limbs and moves in circular form) and Vyana Vayu (which is an all pervading prana moving in and out and up and down - this Prana repairs and compensates for any deficiency in the other vayus)

The vital energy joined to the five activities forms the vitality sheath, by which the material sheath is filled, and engages in all these activities. 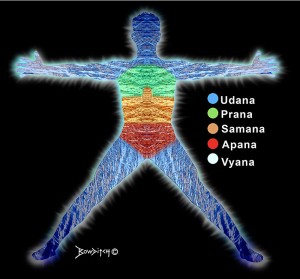 The Manomaya Kosha (Mental Body) performs many functions including holding Annamaya and Pranamaya Koshas together. It acts as a messenger between the external world and these bodies, conveying experiences and sensations. Mind is consciousness. Conscious, Subconscious, Unconscious. It acts on an instinctive level securing our basic needs (food, shelter, sleep, security, procreation), it creates a sense of ''I''- ness (ego/ahamkara), it contains our memories, it operates on higher levels such as intellect, and interacts with more subtler Koshas such as the Wisdom Body (Vigyanamaya Kosha) or the Blissful Body (Ananadamaya Kosha) where it produces wisdom and  intuition etc. But generally here we are referring to the lower mind - Adi Shankaracharya speaks of the need to go beyond this mind.....

The Vigyanamaya Kosha (Vijnanamaya)(or Wisdom Body or Astral Body or Body of Intuition) is ever more subtle than the former koshas, though as before, it pervades all the Koshas. When this sheath is awakened one begins to experience life on a more intuitive level, leading to Wisdom. It is the level of the higher Buddhi or intellect. At this level ''I''- ness had changed to a sense of the ''One''-ness of us all. There is love, compassion, joy. We can work directly on this Kosha by engaging in philosophy, new areas of good thought, mixing with loving, spiritual people (Satsang), working hard to accomplish good things and follow our spiritual paths. Pleasant experiences in meditation and dreams or astrally come from this Kosha. It is the link between the individual mind and the Universal mind. It is developed by abstract thinking and systematic meditation. Adi Shankaracharya says we still have to move beyond this Wisdom Body. The Anandamaya Kosha or Blissful Body is the most subtle sheath. The transcendental body. The home of the most subtle prana. The Kosha that is in most intimate contact with Pure Spirit. It is not about the emotion of Bliss, but the true ecstasy from contact with the Ultimate. Omniscience. Transcendental Bliss. The yogis say we are all already at that level. It is there for the realisation. We are already Pure Spirit, though caught up in human dramas. Anandamaya Kosha is the threshold of Samadhi - it may appear in the form of a luminous Golden Egg/shivalingam

So there exists only the supreme God, the One Reality without a second, consisting of pure consciousness, without any blemish, peace itself and without beginning or end, actionless and having the nature of pure bliss.

We can choose where we concentrate. Some are very caught up in Body experience, others in maintaining their ''vitality'', some in the lower mind, identifying with the ceaselses internal monologue, others are intellectual beings given over largely to higher feelings and actions. Naturally we all vary day to day, minute to minute, moving between these Koshas. This is important - if one Kosha is not functioning well, then all suffer. The practices of Yoga and Tantra aim to transmute the qualities of the Gunas in each Kosha - to move towards Sattwic states. We can choose in life where we concentrate our efforts and attentions most. For those established in Anandamaya Kosha - the very very few - we should just keep quiet and listen to them.

Beyond the Five Koshas is the Absolute Self.