Tantra claims that all matter is composed of the five tattwas or elements. This theory is also advanced in the metaphysics of many other cultures. The five tattwas are known as ‘Akasha’ or Ether, ‘Vayu’ or Air, ‘Agni’ or Fire, ‘Apas’ or Water, and 'Prithvi’ or Earth.

The tattwas do not directly correlate to physical or chemical elements but should rather be understood as being created by different energy vibrations.

The Tattwas correspond to a large degree with the chakras, but some people relate more readily to the concept of one above the other. Descriptions of the chakras appear to be more linear or precise, and perhaps thus appeal to a primarily left-brain, masculine outlook on life, while descriptions of the Tattwas appear to be more flowing or diffuse - more ‘yin’, one could say.

The Tattwas are generated from each other, and thus incorporate some of the characteristics of the elements that go before them.

It may be helpful for you to use the language of the tattwas to develop a subtle awareness within your physical form of the presence of the solidity and ‘groundedness’ of Earth, the liquidity and flow of Water, the heat and energy of Fire, the movement and vibration of Air, and the spaciousness and expansiveness of Ether.

Simple meditation or concentration on the symbols or images described below is sufficient. 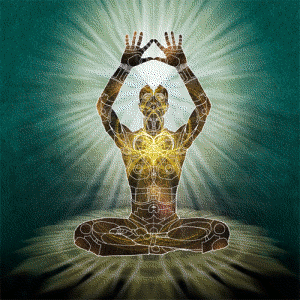 When you are practising Yoga Postures or asana you may like to include some awareness of the Tattwas. For example, balancing poses help to stabilise the spaciousness of Ether, and also they help to ground you to the Earth. Dynamic flowing practices can be understood or approached in terms of the fluidity of Water, or the free movement of Air. Practices which generate heat in the body can be understood in terms of the element of Fire, as can practices that stimulate the abdominal area which houses your inner fires of will and digestion. And so on.

You can be creative with this process; individual asanas often combine different elements, which is the nature of all of life. Using the Tattwas may help you to draw closer to your practise, to understand what is going on at a deeper level, and all of this using the appealing symbolic language of the elements.

Akasha or Ether is represented as a circular black void, but as darkness contains all the colours of the spectrum, this black void is represented as being dotted all over with every existing colour, like the pin-pricks of millions of stars in the night sky. It is located at the top of the head and its corresponding chakra is Vishuddhi or the throat chakra.

Vayu or Air is represented as a grey-blue gaseous hexagon, which has been formed by six dots. It is located in the region between the heart and the throat, and its corresponding chakra is Anahata or the heart chakra.

Agni or Fire is represented as a fiery red downward-pointing triangle. It is located in the region between the heart and the navel, and its corresponding chakra is Manipura or the navel chakra. 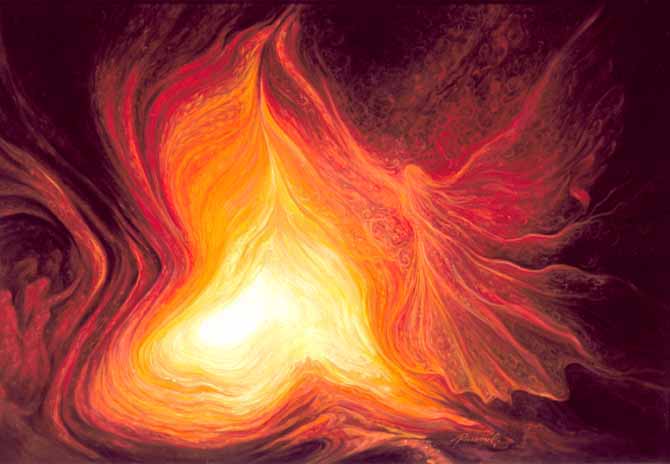 Apas or water is represented by a white crescent moon, (which lies on its back in a form like a smile), encircled by a placid ocean. It is located in the region between the navel and the knees, and its corresponding chakra is Swadisthana or the pelvic chakra. 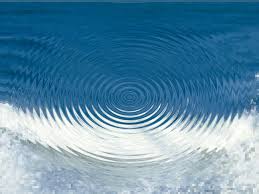 Prithvi or Earth is represented as solid yellow square. It is located in the region between the knees and the toes, and its corresponding chakra is Mooladhara or the root chakra.

Simple visualisation of the symbol associated with the particular tattwa and contemplation of the qualities of that element are sufficient to enhance your practise.

The following technique helps to stabilise the prithvi or earth element. As usual, practise within your comfort zone, taking care not to strain your body.

Kneel on the floor. Sit down onto the heels. Use a small cushion under the feet if this feels unpleasant.

When you are settled, comfortable and ready, bend the trunk forwards from the hips, keeping the spine nice and long, and place the forehead onto the floor. The buttocks remain on the heels.

Bring the arms to stretch out in front of the body, palms facing downwards on the floor, hands shoulder-width apart, elbows softened slightly.

Relax here for a few breaths.

(The forehead should rest on the floor, but if this takes some time to happen, don’t be concerned. As the spine limbers up the forehead will reach the floor.

If the forehead does not rest easily on the floor, or if it feels uncomfortable there, slide back the hands to rest under the forehead until it is time to move….then stretch out the arms as described above.)

Without moving the position of the outstretched hands, (or sliding them forward only a matter of an inch or two),INHALE, raise the head, and slowly move the chest forward, keeping it and the chin just above the floor, until the chest is in line with the hands.

As you slide forward the buttocks are sticking up somewhat in the air.

Then raise the head and chest upwards and sink the pelvis down to the floor.

In the final position, called Bhujangasana, the arms are usually bent. It is more important to accommodate your lower back than to straighten your arms. Keep your shoulders down away from your ears.

Any part of your body that is not actively involved in maintaining this pose should also be at ease, so scan down through your body, and notice if you are holding anywhere unnecessarily tight.

Hold this position for a few seconds while holding the breath.

Then as you EXHALE raise the buttocks slowly, drop the chest and chin towards the floor, and begin sliding backwards, until your buttocks are once more resting on your heels and your forehead is resting on the floor (or hands if necessary).

This is one round.

Take some resting breaths, and when you are ready repeat the ‘striking cobra ‘movement.

(This can be in a chair or in a comfortable meditation pose.)

When you are ready, create an image or visualisation behind your closed eyes of a solid yellow square.

Allow this image to consolidate. If you cannot visualise it, simply think about it…………

Be aware of the equal lengths of the sides of the square.

As you next INHALE move your awareness up along one side of the visualised yellow square.

RETAIN your breath INSIDE while you move your awareness across the top side of the square.

EXHALE as you move your awareness down the other side of the square,

and RETAIN your breath OUTSIDE as you move your awareness along the lower side of the square, to return to where you started.

Continue for several slow rounds in this manner.

Count the lengths in seconds of the inhalation, exhalation and both the retentions. They should all be of equal length.

There should be no straining whatsoever, and this practice must at all times feel pleasant and comfortable.

Externalise slowly, grounding your attention into the present moment.