Right at the time of his birth Kali carried an Upaasthi (a small bone) and his entire body complexion was sooty and dark. This huge-being, with a terrible tongue and an obnoxious smell about his entire physique, chose gambling, liquor, woman (prostitutes) and gold as his permanent abodes. ~ The Kalki Purana

Often it is presumed that Kali, the fierce aspect of the Vedic Goddess, is the divinity ruling over the Age of Iron. 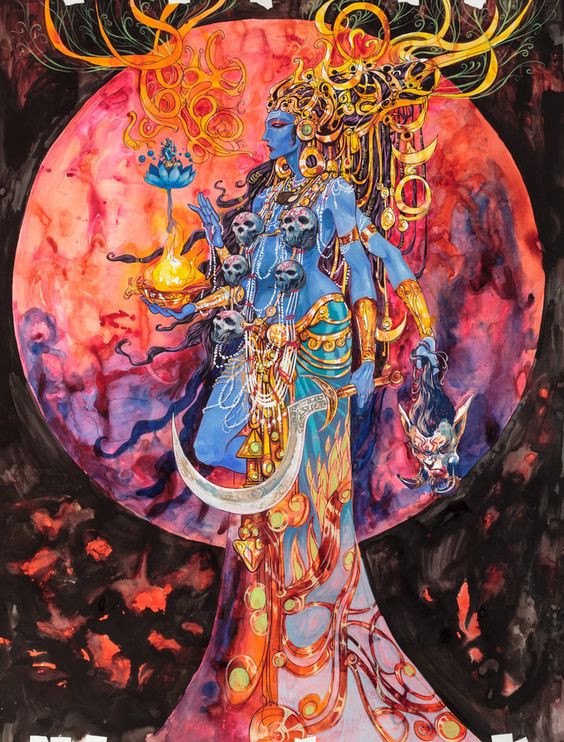 Not so. Our ferocious and merciful Mother has been much maligned. Her role, far from demonic, is in fact that of demon-slayer.

The Kali Yuga is instead the age of Kali, a demon born in different eras as Ravana ( the bad guy of the Ramayana tales) and Duryodhana.

Kali, the Goddess, is spelled and pronounced Kālī, with long vowel sounds. It is the feminine form of Kāla, a name for Shiva.

Kali the demon  - in contrast - is a snappy-sounding word.

The demonic Kali takes his name from the Sanskrit root kad which means to “suffer, grieve, hurt, confound, or confuse”. (Gwendolyn Taunton, see Source below)

Some legends say that Kali, the demon, was formed from that portion of the poison, generated by the churning of the oceans, that Shiva did not drink. Others say that Brahma brought Kali into being to fulfil the pralaya (Dissolution) of the last age, and to usher in the age of iron.

Kali  incarnated when Krishna left the earth. Krishna is an avatar of Visnhu. And Kali will remain on his stampede through the ages, until Vishnu incarnates again in his future avatar known as Kalki, at which time a new Golden Age will commence.

Kali ~ The name of the worst throw in dice, and of the worst of the four ages of the world, personified as a powerful evil being. (Wikipedia)