Vishuddhi includes the word shuddhi which means ''purification''. The Bija or seed mantra for Vishuddhi is HAM (the essential meaning of which is ''I Am'') (it is pronounced with a long drawl on the A, between awww and ahhhh.)

''This chakra is the gateway to liberation for he who wishes to know the real meaning of yoga and whose senses are purified and controlled.'' ~ Sat-Chakra Nirupana ( by Sw. Purnananda 16th century)

Vishuddhi is traditionally symbolised by a purple lotus blossom with 16 petals. Sometimes the colour is smoky grey. The element of Vishuddhi is Ether (Akasha) suggesting Space. It could be visualised as an infinte cosmos, or nebula of many colours. In the centre of the purple lotus is a white circle within which is a single drop, representing nectar (amrita/soma). The white circle represents the Nada or cosmic sound, and the chakra is associated with the sense of hearing.

The nectar here (on a more mystical level) drops from Bindu  (Moon) (at the top/back of head) and is normally consumed by the fire in the belly (Manipura chakra) (Sun) and thus is our life essence gradually consumed. Stimulation of Vishuddhi is said to halt this fall into the fires by capturing the drops from Bindu. Inverted asana such as Vipareet Karani Mudra, for example, are said to delay this process... 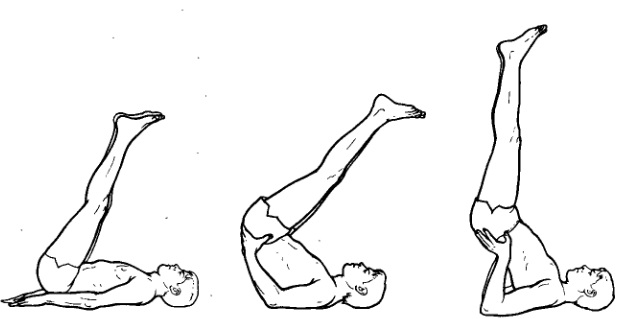 “The Sun is in the navel and the moon in the head. The nectar that comes from the moon is consumed by the sun, and the life force is gradually used up in this way.” ~ Gherandha Samhita (17th century)

The nectar within Vishuddhi is either poison or nutrition and the centre is said to separate one from the other.

But the serpent they had used to churn the oceans spat out a deadly poison that was capable of destroying the whole earth. Quickly the Devas caught it in a bowl so it was not able to do any harm. But as they had absolutely no idea what to do with it or how they could permanently “dispose” of it, they turned to Lord Shiva for help.

Lord Shiva is the most gracious of all the gods, and will never refuse a request from anyone. He took the bowl of poison and drank it down to the very last drop. However, in the process he did not swallow the poison but held it in the Vishuddhi Chakra and purified it by means of Ujjāyī Prānāyāma and Jālandhara Bandha . In this way he rid the world of a deadly peril. Through the poison his throat was coloured dark blue, and since that day he has borne the nickname Nīlakantha (the blue-throated one). ~ (Story from the Puranas)

Vishuddhi is associated with the thyroid centre, and gentle neck movements, and asana which put pressure or stretch on the throat help to resolve issues in Vishuddhi.  For example...Matsyasana..

...although simpler variations of these asana may be practised with similar effect.

Ujjayi pranayama which is gentle breathing with a slight constriction in the glottis in the throat, creating a soft snore like a babies breathing at sleep, is a very useful technique for regulating Vishuddhi chakra. https://somathread.ning.com/groups/yoga-and-tantra/p/ujjayi-pranayama

The feeling of a cool breeze moving through the Throat Centre is another way to stimulate or visualise this centre. Singing and chanting are other stimulants and regulators of Vishuddhi.

Because Vishuddhi is associated with hearing and sound and singing, I include one of my favourite pieces of sacred music... If you tell the truth you don't have to remember anything.