In the beginning there were only two: Tawa, the Sun God, and Spider Woman (Kokyanwuhti), the Earth Goddess. All the mysteries and the powers in the Above belonged to Tawa, while Spider Woman controlled the magic of the Below. There was neither man nor woman, bird nor beast, no living thing until these Two willed it to be. 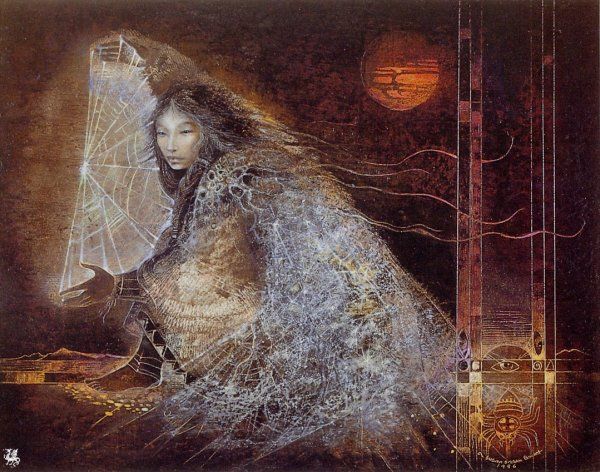 To the Hopi the Great Spirit is all powerful. He appeared to the first people as a man and talked with them in the beginning of this creation world. He taught us how to live, to worship, where to go and what food to carry, gave us seeds to plant and harvest. He gave us a set of sacred stone tablets into which He breathed all teachings in order to safeguard his land and life. In these stone tablets were made, instructions and prophecies and warnings. This was done with the help of a Spider woman and Her two grandsons. They were wise and powerful helpers of the Great Spirit...

It was to the Spider woman's two grandsons the sacred stone tablets were given. These two brothers were then instructed to carry them to a place the Great Spirit had instructed them. The older brother was to go immediately to the east, to the rising sun and upon reaching his destination was instructed to immediately start to look for his younger brother who shall remain in the land of the Great Spirit. The Older brothers mission when he returned was to help his younger brother (Hopi) bring about peace, brotherhood and everlasting life on his return.

We were told to settle permanently here in Hopi land where we met the Great Spirit and wait for Older Brother who went east to return to us. When he returns to this land he will place his stone tablets side by side to show all the world that they are our true brothers....

Be well, my children, and think good thoughts of peace and togetherness. Peace for all life on earth and peace with one another in our homes, families and countries. We are not so different in the Creator's eyes. The same great Father Sun shines his love on each of us daily just as Mother Earth prepares the substance for our table, do they not? We are one after all. 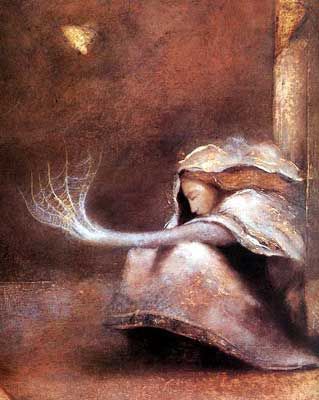 Another Hopi myth says that Tawa created insectlike beings and placed them in the First World. Dissatisfied with these creatures, Tawa sent Spider Woman to lead them, first to the Second World and then to the Third World, where they turned into people. Spider Woman taught the people how to plant, weave, and make pottery. A hummingbird gave them fire to help them warm themselves and cook their food. However, when sorcerers brought evil to the Third World, Spider Woman told the people to leave for the Fourth World. They planted trees to climb up to the Fourth World, but none grew tall enough. Finally, Spider Woman told them to sing to a bamboo plant so that it would grow very tall. She led the people up the bamboo stalk to the Fourth World, the one in which the Hopi currently live. 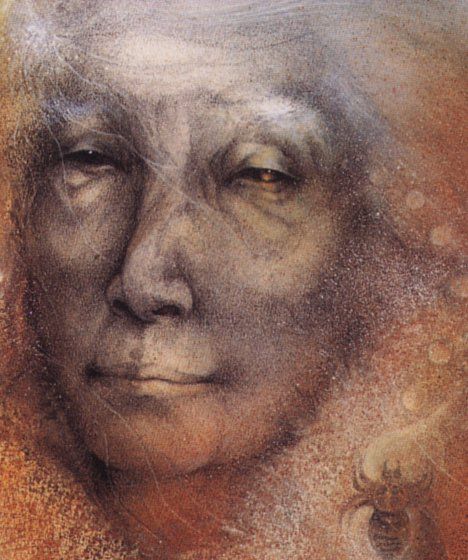 The world at first was endless space in which existed only the Creator, Taiowa. This world had no time, no shape, and no life, except in the mind of the Creator. Eventually the infinite creator created the finite in Sotuknang, whom he called his nephew and whom he created as his agent to establish nine universes. Sotuknang gathered together matter from the endless space to make the nine solid worlds. Then the Creator instructed him to gather together the waters from the endless space and place them on these worlds to make land and sea. When Sotuknang had done that, the Creator instructed him to gather together air to make winds and breezes on these worlds.

The fourth act of creation with which the Creator charged Sotuknang was the creation of life. Sotuknang went to the world that was to first host life and there he created Spider Woman, and he gave her the power to create life. First Spider Woman took some earth and mixed it with saliva to make two beings. Over them she sang the Creation Song, and they came to life. She instructed one of them, Poqanghoya, to go across the earth and solidify it. She instructed the other, Palongawhoya, to send out sound to resonate through the earth, so that the earth vibrated with the energy of the Creator. Poqanghoya and Palongawhoya were despatched to the poles of the earth to keep it rotating.

Then Spider Woman made all the plants, the flowers, the bushes, and the trees. Likewise she made the birds and animals, again using earth and singing the Creation Song. When all this was done, she made human beings, using yellow, red, white, and black earth mixed with her saliva. Singing the Creation Song, she made four men, and then in her own form she made four women. At first they had a soft spot in their foreheads, and although it solidified, it left a space through which they could hear the voice of Sotuknang and their Creator. Because these people could not speak, Spider Woman called on Sotuknang, who gave them four languages. His only instructions were for them to respect their Creator and to live in harmony with him.

For the rest of the story....read From The Four Creations 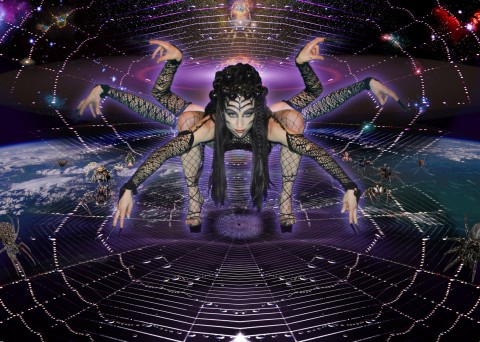 Penny Slinger's image of ''Spider Woman'' from her 64 Dakini Oracle.