This guy has one of the most lengthy biographies I've seen on the web. He is a master of all trades it's seems, and even his art is pleasantly groovy. He also talks complicated mathematics and science, which I am ignoring for the moment.

But I am digging his ''papers'', as he calls them, on various subjects. Especially because he likes to rip the rug from under people I may like quite a bit, such as Rupert Sheldrake, and Alan Watts, and Russell Brand, (all three working towards ''an agenda of drug use'' and pseudo ''mysticism'' promotion, apparently, and quite plausibly in my opinion), and Abby Martin (''beautiful and annoying'', ....sorry doll-face), and Terrence Mc Kenna (self-confessed CIA plant). Graham Hancock. Ram Dass. Timothy Leary. Blavatsky, Kerouac, Allen Ginsberg, Hemingway; All the great and cool get a lash of his tongue. Which could be sad.... but I find it refreshing.

He sees Red Flags everywhere, this Mathis. Most everyone who has set the foundation for counterculture of any kind, he sees as a plant. We are being lulled into spending lifetimes contemplating unknowable things and being passive - armchair philosophers, who think we can get a handle on consciousness - and this is a deliberate ploy to occupy an intelligentsia that might otherwise be out on the streets actually doing something. I see a lot of truth in this idea. But as he says himself... ''—the truth is hard to find. It has been made hard to find on purpose, and I am not claiming I know everything or anything..'' 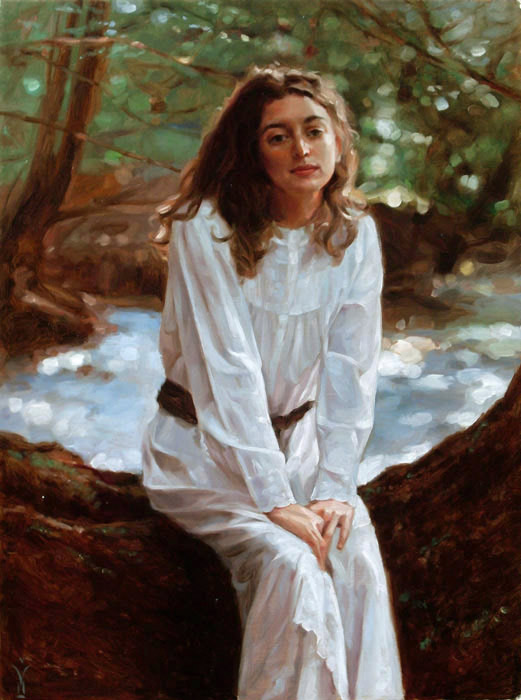 One of his paintings...

Some of the Juicy bits from his Graham Hancock 'paper' ~

''I have recently been studying the government operations of the 1960's against the hippies and anti-war protesters, in which the CIA and other agencies began pushing LSD on these groups to disorient them and marginalize them. Hancock is sounding like a more level-headed Tim Leary or Ram Dass here, although the drug of choice now would appear to be DMT instead of LSD.

This ties Hancock to Russell Brand, Rupert Sheldrake, and Daniel Pinchbeck, all of whom have apparently been recruited by Intelligence to lead the present operation of pushing drugs on the youth. Sheldrake was previously tied to Hancock since they have been lecturing together, selling the same line about “consciousness being the greatest mystery of science” and all that. They were both censored by TED as part of the same psy-op. But now the younger and hairier guys Brand and Pinchbeck have been added to the roster to bring in the young ladies and the dudes.

I have already outed Brand in a recent paper, showing you that he is being used to further suppress the vote. He is trying to convince the youth that voting is ineffectual, so they should just quit. I have also written about Sheldrake, showing you how he is also being used to control the opposition, leading those who are disenchanted with mainstream science into ever more mysticism. Although Sheldrake and I are both opposed to the mainstream, I am demanding science become mechanical again while Sheldrake is insisting it become even more mystical and fluffy than it already is. Basically, Sheldrake's job is capturing my readership—and the readership of all sensible people—and diverting it into ineffectual channels. The same can be said for Hancock, Brand, and Pinchbeck

But even without this new drug-pushing agenda, the consciousness agenda was crap by itself. It simply isn't true that consciousness is the greatest mystery of science. Consciousness is the greatest mystery of brain science, but there are plenty of other mysteries in science that are just as big, and perhaps bigger. The thing about the consciousness mystery is that we aren't even close to solving it. Like the mystery of the universe's beginning or the mystery of life, it is just too big for us. But there are many mysteries we are capable of solving right now, which in my opinion makes them a lot more exciting than the ones we can't solve.

The reason they keep trying to sell you on these ones that are too big for us is that they are great places to camp out and blow smoke. They can't be proved wrong there, because there isn't enough data. So this is where all the top theorists (and the famous new-age guys) hang out. They avoid the solid problems I like to write about, because those problems require collating and explaining a lot of real data. Since they don't have the ability to do that, they prefer to hide out in black holes and the first seconds of the universe and in 11-dimensional math and in holograms and in consciousness, where you can spout all the nonsense you like.

The other thing they like about these problems that are too big for us is that they act as perfect misdirection. They want to divert you into these problems, since once you get in you can waste years of your life with nothing to show for it. They keep all the stupid people talking about sports and movie stars, but they know they can't interest you in that shit, so they have to come up with something more cerebral for you. It used to be manufactured Biblical or literary problems that diverted the intelligentsia, like how many angels danced on the head of a pin or how many hexameters Virgil could write without spilling a trochee. Now it is whether an imaginary astronaut will pass the event horizon of the black hole and get burned up or stretched to death. Armchair philosophy posing as science, in other words.

But why would they want you wasting all your braincells on this stuff? Because if you are reading and discussing black holes, the edge of the universe, 11-dimensional math, or the origins of consciousness, you aren't getting in their way. They have then successfully diverted you into sciolism. This is what all their “science” magazines are about. Those magazines no longer contain a jot of real science. Instead, they are written from various government cubicles to misdirect you into manufactured problems and controversies. While you are out beating their phantom bushes, they are free to do what they like in science, art, and government.

I can see (Russell Brand) is trying to divert my fellow hippies back into navel gazing, experimenting with government-created lab drugs, and a new-age sort of faux-spiritualism based on total self-absorption, shallow subjectivity, and a science based on wish-fulfillment. In other words, the controllers are re-packaging the same thing they destroyed progressives with in the 1960's, updating it with new catchwords and conmen.

Some readers will by now be pegging me as a tightass, but they should know I am all in favor of spiritualism, inspiration, serendipity, mystery, and so on. I don't think physics is the place for any of those things (except that I take inspiration wherever I can get it, with gratitude and without question); but I do see real evidence for them everywhere. I consider myself a hippie. My problem with all this isn't the mystery or the inspiration, it is the fact that I now know the hippie movement was infiltrated and taken over by Military Intelligence decades ago.

I am all in favor of festivals, but the problem is I can see all the major hippie, alternative and New Age festivals are now fake. These festivals and movements are now organized and led by fake hippies and gurus planted by Intelligence, and job one for these people is keeping the hippies diverted. Daniel Pinchbeck, Russell Brand and the rest are selling you a new form of Tim Leary's old “turn on, tune in, drop out.” They are trying to convince you this is how the revolution will come about, because they know that it has the least chance of coming about that way.

They are convincing current hippies that the world will be transformed by them sitting around in a circle holding hands and thinking good thoughts. It won't. Holding hands and thinking good thoughts is fine, and may be a good first step. But by itself it won't change anything. The revolution requires real action, and the controllers are doing everything they can to prevent any action. That is where the drugs come in. The drugs keep you in an induced stupor, and in that stupor you mistake your ideas for reality.

You think that just because you have imagined peace, peace has really happened. But the world doesn't work that way. Reality isn't a wish-fulfillment. It isn't a construct of the mind. It isn't a hologram you can rebuild from a happy thought. The hippies have to find some way to resist the bad people. These bad people exist in the real world and they are performing real actions. They will continue to perform them until they are stopped. They will not be stopped with meditation.''

Hmmmmm. Ok. That's all for now. Food for thought. Much more at the source posted above.

Another of his paintings.