''Ernest McClain's book constitutes an intellectual breakthrough of utmost
significance. It offers a persuasive explanation of crucial passages in texts of
world literature—the Ṛg Veda, the Egyptian Book of the Dead, the Bible,
Plato—that have defied critics of the separate concerned disciplines. All these
passages deal with numbers. What sounds like mathematical nonsense or
literary gibberish has been given life and meaning by McClain's incisive
thoughts. The recurrence, moreover, of identical and similar numbers in
Babylon, Egypt, Greece, and Palestine confirms ever growing speculations on
the historical continuity and direction of a basic spiritual tradition.'' 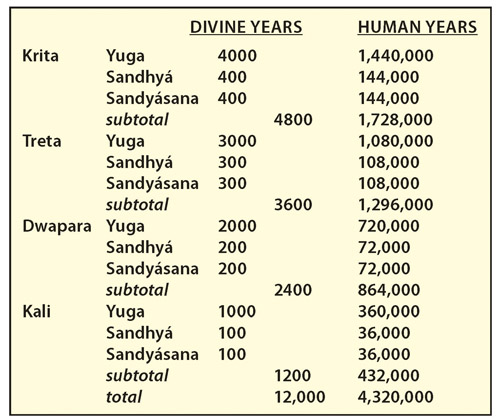 ''To relate these durations to history we need an actual date, and this is supplied by the Hindu astronomers. They agree that the Kali Yuga began at midnight between February 17 and 18, 3102 BCE. From that we can calculate that the transition to the Golden Age will occur around 427,000 CE. It hardly seems worth bothering about something so far outside the time-scale of human experience. But before we dismiss these figures as pure fantasy, we should know that they are not peculiar to Hinduism. Some of them appear in very different contexts, with such precision that there is no question of chance coincidence.

Berossus, who records the Babylonian chronology, was a priest of Bel and had a school of astronomy on the island of Kos in the third century BCE. He gives the figures for the reigns of the ten Assyrian kings who preceded the Flood: they total 420,000 years.4

The Icelandic saga called the Poetic Edda describes the preparations for the apocalyptic battle at the end of time, when Valhalla’s warriors issue forth against the Fenris Wolf:

Five hundred doors | and forty there are,
I ween, in Valhall’s walls;
Eight hundred fighters | through one door fare
When to war with the wolf they go.6

800 fighters going through each of 540 doors totals 432,000. So the number of warriors gathered in Valhalla on the last day is again the number of years in the Kali Yuga, the last age of the Maha Yuga cycle.''

''Ernest McClain, one of the most original and ingenious researchers of our time. He has uncovered evidence of a kind of multidisciplinary game played with these self-same numbers which hinges on musical tuning systems. Those in the know included the Babylonians, the Vedic poets, Plato, the compilers of the Hebrew scriptures, the earliest Christians and Gnostics, and whoever gave the Quran its present form. For example, McClain interprets the Arks of Babylonian and Hebrew legend as multi-story diagrams that enclose, or “save” from the flood all possible numbers, the ones needed for calculating the calendar and the musical scale. In the case of Noah’s Ark, the significant number is none other than 432,000.''

I haven't read much of Mc Clain's book yet....but it looks interesting. Complicated but interesting. I'm putting this post and links here in case anyone else would like to follow it up too.

''Modern authors, notably Ernest G. McClain in his books ''The Myth of Invariance'' and ''The Pythagorean Plato,'' have argued persuasively that the ancient Babylonians, Hindus, Egyptians and Greeks developed elaborate traditions of tonal symbolism. Phenomena such as harmonic resonances and the tempering of musical scales were related to observations of biological and astronomical cycles. The plotting of these cycles, and the urge to embody them in sound as well as express them in equations, helped spur the development of both music and mathematics.''