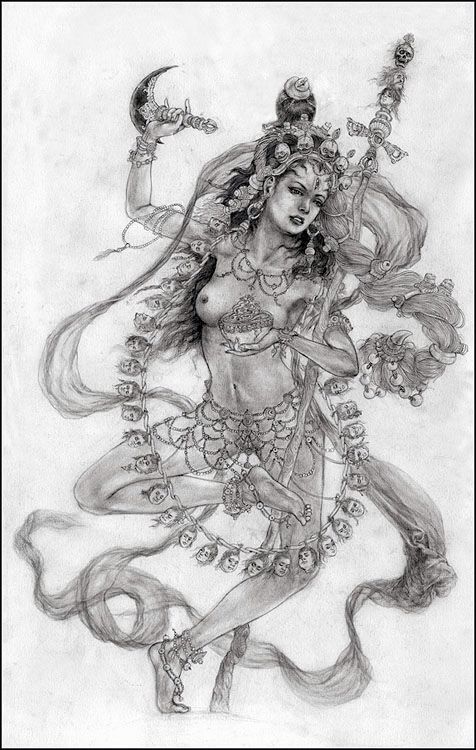 Dakini are described as women who fly, she who moves in space...sky dancers. The name originally came from the Tibetan word ''Khandro''. Dakinis are said to be the embodiment of Intuition. The space they fly through is the Shunyata..the Void from which all emerges. the Void of Plenum. Dakinis are Void walkers.

Though often depicted as wrathful, this is simply because Dakini wisdom is direct, radical, courageous and sharp. Though represented in the female form they are the quintessential representation of non-dualism in Vajrayana yoga, and so are beyond gender.

Dakini is a complex subject, representing infinite and subtle cosmic wisdom, but also used on a personal level as a visualised aspect of Buddhahood, or awakening. She is a Messenger of Wisdom.

''The dakini releases blockages in the energy field and melts frozen patterns, so that the door of the mind is suddenly ajar and something new can enter. Dakinis are often connected to the phenomena of synchronicity and inexplicable coincidences of fate. Tsultrim Allione wrote in her book, Women of Wisdom, "The dakini appears at crucial moments. These encounters often have a quality of sharp, incisive challenge to the fixed conceptions of the practitioner."

''Much of my research in the last decade has been to document the unbroken lineage of female shamanism across Afro-Eurasia, from ancient times to the present. The continuity of practices, rituals, and artifacts identifying the sacred women who have functioned as religious leaders in their communities ..... demonstrates direct links between Greek Maenads, Central Asian Amazons, Indo-Tibetan Dakinis and Yoginis, and European Witches. All of these assemblies of women were known for their abilities to fly through the air, heal the sick, resurrect the dead, brew sacred intoxicating fermented beverages (such as Soma), and perform sexual and divination practices for which they have been misunderstood, maligned, peripheralized, and demonized in the modern world. ''

The concepts of Soul Flight and Bird Goddesses is very ancient.

Yeshe Tsogyal who, along with her consort Padmasambhava, originated Tibetan Buddhism, is considered an emanation of Vajrayogini.

There is an archaeological theory about the exchange between East and West along the Silk Road for thousands of years and of shamans migrating both directions. There are ancient Caucasoid burials in Cherchen in Northern China which hold tall, blond-haired, blue-eyed people in shamanic garb. Yeshe Tsogyal is said to have been born in Cherchen, perhaps then a trained lineage -holder from the cross-over shamanic traditions of East and West.

Note: the representations of Vajrayogini show her drinking blood, which is her own menstrual blood. You can look this up, the symbolism of it etc. It is the red bodhichitta of the Great Mother, that which connects all beings through the chain of birth. It is alternatively called The Elixir of Life. She also carries a chopper or knife which is used to cut away at ego and anything that is not essential. Practice of Vajrayogini sadhana is said to be the quickest method in degenerate times. You can check out material on Anuttara Yoga.

In my opinion Vajrayogini and Red Dakini are similar archetypes to Prana Shakti from the tantric practice of tattwa Shuddhi, and to Durga. I see them as symbolically similar. The energy is the same. (In my opinion for what it's worth). Here is a couple of pictures of Prana Shakti. 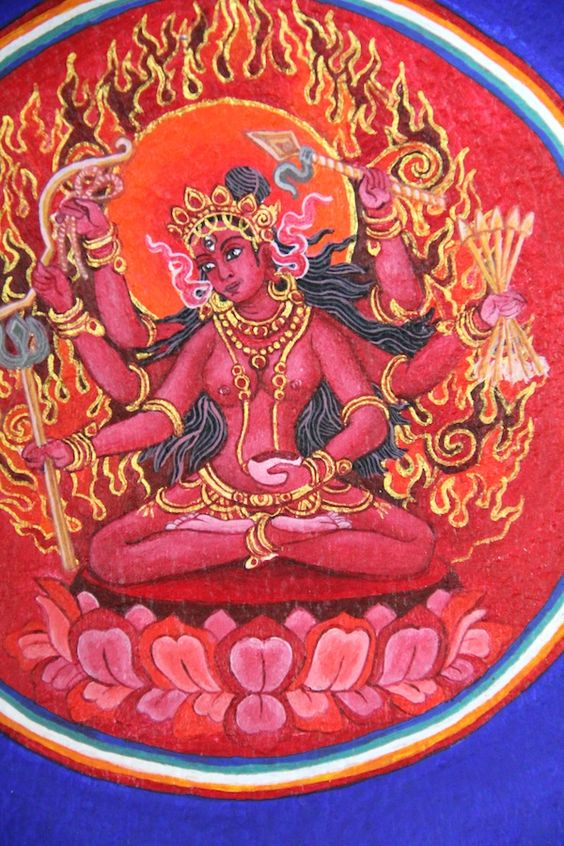 Links to some sources and archives that have further info for those interested on Vajrayogini....