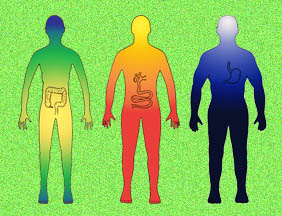 The concept of the three Doshas is one of the fundamental precepts of Ayurveda.

The Three Doshas are VATA, PITTA and KAPHA.

These Doshas, or constitutional types, arise from the Five Elements, of Ether, Earth, Fire, Water and Air.

From Ether and Air comes VATA.

From Fire and Water comes PITTA.

From Water and Earth comes KAPHA.

Individuals are treated in Ayurveda by an understanding of what is their basic constitution using these Doshas.

VATA is cold, dry, light, mobile, subtle, changeable...what we would think of as primarily ''Air''. It governs Movement.

PITTA is hot, light, fluid, sharp, malodorous, clear...what we would think of us primarily ''Fire''. It governs heat and chemical reactions.

KAPHA is cold, wet,  heavy, slow, static, dense..what we would think of as primarily ''Earth''. It governs weight and substance.

''Individual constitution is acquired at birth and remains constant throughout life....combinations exist....two Doshas may exist in equal strength.'' ~ From The Yoga of Herbs by David Frawley and Vasant lad.

Here is one example of a Dosha Quiz which can help you understand your primary Dosha ~ http://www.whatsyourdosha.com/quiz/

Different herbs and treatments will be applicable dependent on your Dosha or variations thereof.

Doshas are similar in a way to the ancient understanding of the bodily humours, that is Bile, Phlegm and Air. Thus someone might have been said to have a phlegmatic or bilious disposition and would be treated accordingly.

Here is an article describing the Three Doshas in more detail ~ http://www.ayurvedacollege.com/articles/drhalpern/Tridosha_Science_Ayurveda

Extract from this article...

Ayurveda defines disease as the natural end result of living out of harmony with one’s constitution. Our constitution is the inherent balance of energies within our bodies and our minds. It describes who you are on the most fundamental level.....

The Vata dosha is said to be made up of the air and ether elements. This means that it has qualities which are similar to these elements. Vata is very much like the wind - it is light, cool, dry and mobile. In the body, those people with a Vata nature experience more of these qualities. Their bodies tend to be light, their bones thin, and their skin and hair dry. They often move and speak quickly. When out of balance, they may lose weight, become constipated and have weakness in their immune and nervous systems

These qualities also reflect in their personality. Those with a Vata nature tend to be talkative, enthusiastic, creative, flexible and energetic. Yet, when out of balance they may also become easily confused and overwhelmed, have difficulty focusing and making decisions and have trouble sleeping. This becomes more apparent when they are under stress. Emotionally they are challenged by cool emotions like worry, fear and anxiety.

The Pitta dosha is said to be made up of the fire and water elements. Fire is more predominant and those people with a predominant Pitta nature have many of the qualities of fire within them. Pitta tends to hot, sharp and penetrating. It is also somewhat volatile and oily. The oily nature of Pitta is related to the secondary component of water. People with a Pitta nature reflect these qualities. They tend to feel warm, have somewhat oily skin, penetrating eyes and sharp features. They tend to have moderate weights and good musculature. When out of balance they tend toward diarrhea, infections, skin rashes and weakness in the liver, spleen and blood.

These qualities also reflect in their personalities. Pitta people tend to be highly focused, competitive, capable, courageous, energetic and clear communicators who get right to the point. They like to solve problems and when under stress they dig in their heels. They can however also become overly intense and speak with a sharp tongue. They make great friends but feared enemies. Emotionally they are challenged by the heated emotions of anger, resentment and jealousy.

Within the Kapha dosha there is a predominance of the water and earth elements. Like these elements Kapha tends to be cool, moist, stable and heavy. In the body these qualities manifest as dense, heavy bones, lustrous, supple skin, low metabolism, and large, stocky frames. In addition, those with a Kapha nature tend to feel cool. When out of balance, Kapha individuals are prone to gaining weight and tend to have weaknesses in their lungs and sinuses where there is an accumulation of mucous. Those of Kapha nature are also most prone to non-insulin dependent diabetes mellitus.

The elements of water and earth also reflect in the personality. The heavy, stable nature of Kapha reflects in a stable personality which is not prone to quick fluctuations. Those with a Kapha nature handle stress very well, often not even noticing that it exists. They don't like change, are generally conservative and would prefer to keep things just the way they are. Those with a Kapha nature are also comfort seekers. This relates to the soft watery nature of Kapha. Too much comfort however can lead to a lack of motivation and feeling of becoming stuck. When Kapha is out of balance, the heavy emotions of depression and lethargy result.