“In a real dark night of the soul it is always three o’clock in the morning, day after day.”
— F. Scott Fitzgerald, The Crack-Up 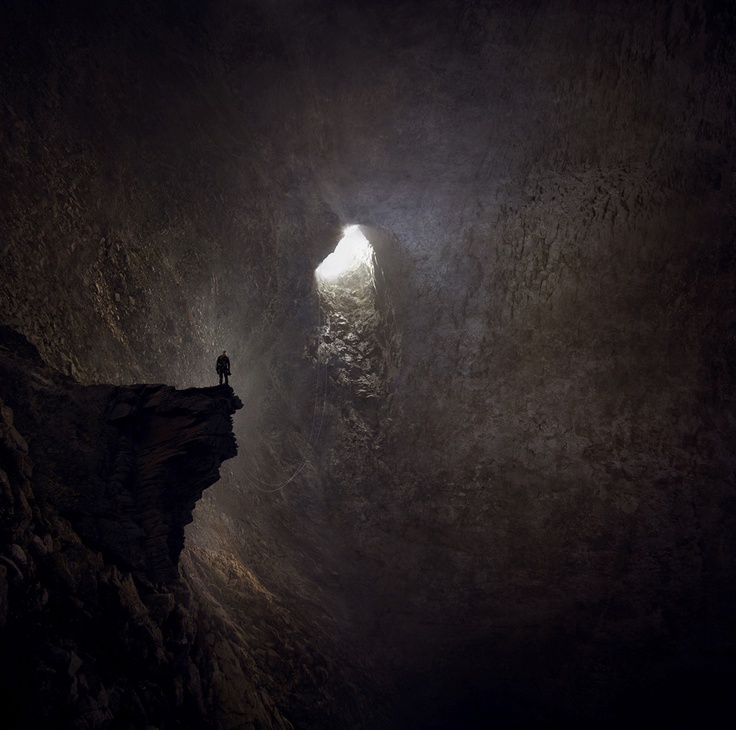 When someone is going through a particularly difficult time, we may say that he or she is having a “dark night of the soul.” During such a period, someone may be plunged into an emotional realm marked by feelings of despair, loss of meaning, and deep uncertainty about life and its purpose. According to author Eckhart Tolle, a dark night of the soul can be brought on by an external event, such as a natural disaster, a life-changing medical diagnosis, or the death of a loved one. It can also be brought on by an internal event, such as reaching a milestone birthday, “hitting bottom” with an addiction, or suddenly feeling like the sense of meaning attached to the life one has created thus far has disintegrated. While the dark night of the soul can be extremely painful, chaotic, and overwhelming, it can also be a time of transformation and rebirth, and one that spurs the discarding of that which is unnecessary, false, or obsolete.

The term “dark night of the soul” originally comes from a poem of the same name written by St. John of the Cross, a Spanish poet and Roman Catholic mystic who lived in the 16th century. The overarching theme of St. John’s poem is how people encounter painful experiences as they reach toward spiritual evolution and connection with the divine. St. John’s poem is divided into two books that illustrate the two phases of the dark night of the soul: first, the healing of the senses, and second, the healing of the spirit. In this context, healing is achieved through a process of “purification.” One way of looking at this is that, in dark times, we are challenged to the point where we come into contact with the very essence of our senses and spirit — and there is power in this.

It is interesting to note that St. John was enduring his own dark time when he wrote the poem, as he penned it while serving time in prison due to disagreements with the Carmelite Order over his reformations. A few years after the poem was written, St. John wrote a treatise of the same name that gave a theological explanation of the poem.

St. John’s concept of the dark night of the soul has influenced and inspired many writers, artists, thinkers, spiritual leaders, and people in the field of psychology, such as psychiatrist Carl Jung and American Buddhist nun, teacher, and author Pema Chödrön. One reason for this may be that while the original poem was religious in nature, it touches upon a universal, existential experience. Several myths that predated St. John’s poem also describe a similar type of “psychic descent,” such as the descent of Inanna and Persephone’s plunge into the Underworld.

“I’m no Pollyanna, but what I’ve learned about the dark night is that it can organically incubate something drastically unexpected — and good— if you have the proper support.”
— Judith Orloff, M.D.

Carl Jung and the Alchemy of the Night Sea Journey 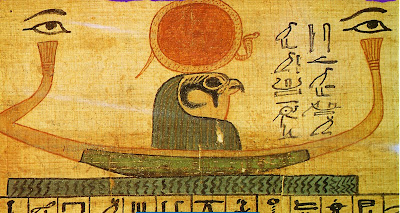 Carl Jung extrapolated St. John’s idea by incorporating stages from the medieval art of alchemy — a scientific, philosophical, and esoteric tradition practiced in Egypt, China, India, and several other parts of the world. Alchemy focused on attempting to purify and transform substances; perhaps most famously, transforming lead into gold. Alchemical stages described the physical changes that the substance underwent as the alchemists experimented with it. Jung used these alchemical stages as a metaphor to describe the psychological process of navigating the dark night of the soul—or, as Jung described it, the “night sea journey.”

Specifically, Jung related the night sea journey to the alchemical stage called nigredo, or blackening. In this stage, the substance undergoing change is blackened by fire so it can be purified and broken down to its most basic constituents, also known as the prima materia. Psychologically speaking, this is when a disruptive event causes us to turn inward; shed our outside, public-facing self; and confront the most basic parts that make us up, both light and dark. This is when we enter the dark, bewildering inner world of the unconscious, where we encounter what Jung called our shadow, or the previously unexplored “dark side” of our personality.

In his book Alchemical Psychology: Old Recipes for Living in a New World, psychologist and author Thom F. Cavalli, Ph.D., writes: “…Your garden, laboratory, church, or temple is not the place to find the prima materia used in personal alchemy. Rather, a good place to begin the search is in our mess, our crisis, our broken dreams, our worst nightmare, disasters — all those horrible experiences that are associated with the shadow aspects of life. That is where we are most vulnerable and most apt to summon up the courage to make dramatic changes.”

During this stage, as we confront our disowned or suppressed shadow, we may also start to let go of attachment to our outward identity and “worldly objects” such as our body, material objects, job titles, etc. When we start to let go of the outer layers, we start to become more deeply acquainted with our full selves, and we also can become more in tune with our intuition. According to Dr. Cavalli, the work of the nigredo stage is to integrate both the darkness and light in our lives.

An example of this might be someone who has a crisis of identity after losing a job. The time after the loss may force the person to confront not only feelings about being fired but also those about who he or she was in the job, and what the job meant. Time spent in reflection may unearth suppressed “shadow” material — such as how the person may have become addicted to overwork to push away a sense of loneliness and low self-esteem. He or she may need to fully experience these feelings at the “bottom” and seek support for them to emerge from the job loss and its ensuing identity crisis with greater self-knowledge and possibly a newer, more authentic identity. Therefore, when the darkness of the shadow comes to consciousness, it can be integrated with the light (or the more conscious, life-affirming qualities of a person). This, in turn, can drive the person forward into making more informed choices that truly support his or her authenticity, wholeness, and well being. 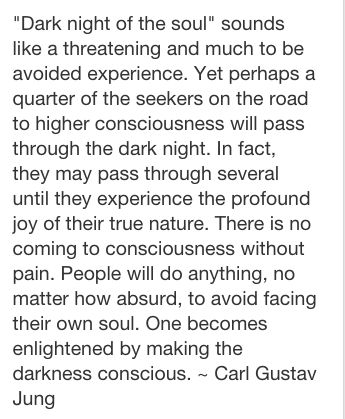 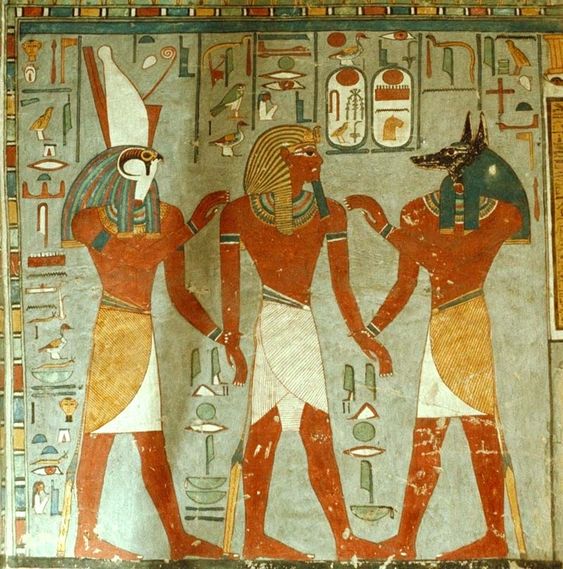 Pema Chödrön and Cultivating a Different Relationship with Difficult Emotions

Pema Chödrön has also written extensively on navigating the dark night of the soul and its accompanying emotions such as fear, anger, jealousy, bitterness, grief, shame, and hardheartedness. One of her core tenets is that difficult emotions can be used to develop greater courage, compassion, and wisdom.

Some of Chödrön’s prescriptions for walking through the dark night of the soul and utilizing this time for personal development include:

In her book When Things Fall Apart: Heart Advice for Difficult Times, Chödrön writes: “Fear is a natural reaction to moving closer to the truth.” Instead of avoiding it, which is what we are so often predisposed to doing, Chödrön suggests that we explore our fear, as “it will nevertheless introduce us to all the teaching we’ve ever heard or read.” By becoming intimate with fear, it induces humility, steers us to become more present and receptive, and brings us closer to our heart, advises Chödrön.

According to Chödrön, meditation can also assist us during difficult times, as it helps us to develop compassion (or “loving-kindness”) for ourselves and others. When we meditate, we can develop specific qualities of loving-kindness, such as expansion of our ability to be with our experience (i.e., distress tolerance), and becoming more attentive to the present.

Chödrön is a strong advocate of the meditative breathing practice of tonglen, which is a Tibetan term whose literal meaning is “sending and taking.” The practice originally hails from India; it migrated to Tibet in the 11th century. Practicing tonglen does not require that one identify as Buddhist, and it can be done either informally, such as when you’re in the middle of an argument, or formally, such as when you carve out time to practice it in its official four-stage process. In essence, it is a practice that helps to develop compassion and understanding for self and others. It also helps to calm the mind and body.

Basically, the practice of tonglen is where you focus on taking in pain and difficult feelings during inhalation, and then focus on sending out compassion, spaciousness, and relaxation during exhalation. Rather than pushing away our own pain or that of others, tonglen encourages us to be present with it and to cultivate tolerance and compassion through the alchemy of the breath.

A Few Words of Wisdom

The concept of using the dark night of the soul to cultivate oneself, as it is presented here, is not intended to negate or candy-coat the very real sense of devastation that can happen after a major loss or trauma. Rather, it can serve as a roadmap to help navigate a difficult experience.

To that end, particularly in the case of major depression or trauma, while it may certainly be helpful to work with the concepts and tools mentioned above, it is also advisable to seek professional help. According to psychiatrist, professor, and author Judith Orloff, M.D., it is critical to seek support during the dark night, and it can be especially helpful to find a therapist who is open to honoring the sacred, transformative potential of this time. 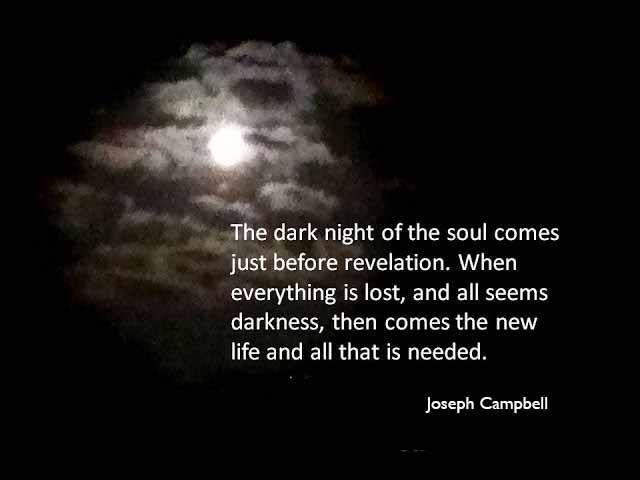 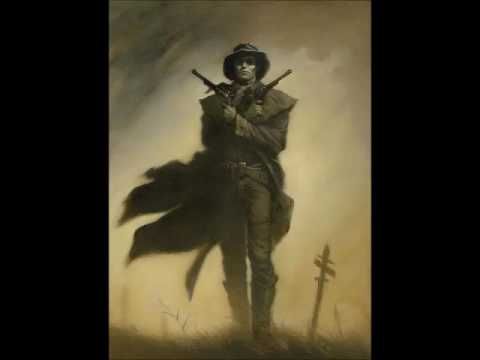 Psalm 23:4 ►Even though I walk through the darkest valley, I will fear no evil, for you are with me; your rod and your staff, they comfort me. Sources (for Navigating the Dark Night of the Soul)

Descent to the Goddess: A Way of Initiation for Women by Sylvia Brinton Perera, M.A.

Dark Night of the Soul by Kaye Gersch, Ph.D.

Dark Nights of the Soul — A Guide to Finding Your Way Through Life’s Ordeals by Thomas Moore, Ph.D.

Dark Night of the Soul by St. John of the Cross