All photos courtesy of the artist

The Astral Body healer, tarot reader, and astrologist explains the magical origins of a new video shot within the University of Chicago's Oriental Institute museum.

There is an undeniable magic at work in Rasplyn’s music. Best known for captivating listeners with her contribution to Venus Aeon’s Elements Vol.1 comp last fall, the Chicago-based composer and clairvoyant Carolyn O’Neill continues to make a name for herself by combining mystical themes with cinematic instrumentation that explores the complexities of Astral embodiment, nature, and past life experiences.

Inspired by what she describes as an obsession with trying to uncover the system of “patterns and ways that the universe communicates with us,” Carolyn has become a facet of her city’s budding occult music scene since the release of her arresting 2014 debut, Scenes Through the Magic Eye. Informed by her work as a trained Astral Body healer, tarot reader, and astrologist, her songs are intuitively aware and visceral, seamlessly fusing together elements of ambient post-rock with trance and psych.

Rasplyn’s strength lies in her ability to conjure transcendent atmospheres in songs like “Circle Round” and “Priestesses and Goddesses” by pairing sparse yet impactful vocals with the swell of horns, drums, and chants. Her songs have a life of their own, each possessing a percussive pulse that mimics the pulse of its listener, making the blend of strings and melodic chords on “Open Door” and the guttural swell of “Temple Moon” feel as intimate as a ritual or a dream. Each track on Scenes Through the Magic Eye, as its title suggests, is an orchestral and immersive glimpse into the unseen, a guided journey framed by sonic and psychic sensations.

We recently spoke with Carolyn about the curative power of creativity and psychic intuition, and how her love for music and mysticism inspired the video for her most recent single, “Scarlets of the Sand.”

Noisey: Your connection to music through mysticism and clairvoyance is really fascinating. What is your earliest memory of being attracted to both disciplines?

Carolyn O'Neill: I grew up playing clarinet and bass guitar. I started both when I was in grade school and in high school I joined the orchestra and a part of it for all four years. Throughout that whole time I was also very into grunge, punk, riot grrrl, and goth so I've always had this balance between classical music and darker and heavier rock. I think that Rasplyn incorporates all of those tastes into one.

When it comes to clairvoyance, ever since I was really little I was always obsessed with trying to figure out what the system behind everything is. I was raised Catholic, but I was always looking for ways that the environment communicates with us in a more definitive way than just going to church. I would say that my dad had a huge influence on me as well, because he had a 25-book encyclopedia set called Man, Myth, and Magic; when I was very small, I would find myself pulling out the books and thumbing through all the pages on astrology, and tarot, and witchcraft, and voodoo and I’d go to school with book reports on all of those things.

In high school, I was doing dream interpretations for people and tarot readings in coffee shops; I even made my mom get me tarot card wallpaper for my bedroom. I never considered myself to be a psychic though, even when doing tarot card readings; I just thought that it was an application of using tools rather than considering myself to be intuitive, but I was always having experiences where certain things would happen in a dream, and then a few days later, a collection of symbols from the dream would somehow come together in real life. I always felt like I was getting winks from the universe.

These were always just hobbies of mine until around the time that I turned 30. My dreams really started to amp up, and I got to a point where I was like, "I need to explore this more, the universe is clearly communicating with me and I don’t know how to map this out or what it means." So at that point I started reading books about increasing psychic awareness and meditation.That was the missing piece.

After I started doing that, I found out that there was a psychic school in Chicago, and I signed up. I’ve been there for a little over four years now, and that has greatly increased my ability to read energy, interpret what I’m handling on a physical level as an empath, and enabled me to do all kinds of healing work. I think that the beauty of it is that I was meant to be doing this work all along. it wasn't just a weird hobby, it's one of my callings.

“Scarlets of the Sand” really incorporates all of your interests and passions into a visually arresting narrative. There’s something very cinematic about your composition. Was that aspect of the instrumentation intentional?
My music is very visual, and whenever I’m writing, I see a story—it’s like I’m scoring a film that is happening inside of my head. My music is also very healing for me. When I compose a song It's like I'm purging different memories and scars from my soul’s past that are coming up for me to examine again. 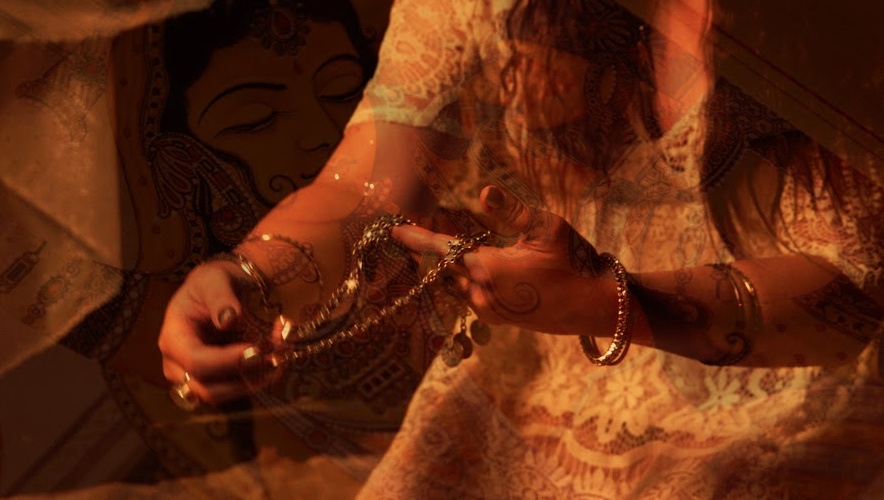 I wanted the video to be a snapshot of what it's like to be me, while also showing how we have one physical body but within that there are so many layers of unconsciousness that are at work that greatly affect the life that we create. Dispositions towards things, loves and fears of things. All of these things are balancing themselves out, battling behind the scenes in our consciousness, and we don’t usually know where it's coming from, but it's there ,and it makes a huge impact on the decisions that we make and the way that we react to different stimuli.

What do you consider to be the most psychically empowering aspect of creating and consuming music?
I think that one of the most incredible things about music is that it's a universal language that we have created. There aren’t any lyrics on this track, and in my other tracks, lyrics are pretty minimal; I think that it’s cool that anyone who speaks any language could listen to it and still feel the impact of it or get a certain message from it. I think that music is a complete language of its own that really transcends the need for the current languages that we’ve been taught. It's almost like a higher form of communication, it’s pure emotion. Being able to communicate with people in that way is to share an intimate part of your soul. It's what words can’t express.

How did your project as Rasplyn begin?
A few years after I graduated from college with my music degree, a student of mine asked if I wanted to start a chamber music ensemble with him, and we created a group that lasted for a couple years that had 12 members. We didn't play any Beethoven or any Mozart, it was all by living composers. It was really great and fun to be a part of, but it was more than a part time job, so the logistics of keeping it alive were very difficult and at the end of the day it was too much to manage.

At the same time, I created a Soundcloud page of some of the music that I had composed in college and it started to get some attention from Philippe Gerber at Alrealon Musique. He asked me to collaborate on some tracks with him, and that’s when things really kind of took off. I found that when I started writing for myself and performing for myself I began experimenting more than ever before. I feel like the choice to go solo ended up expanding what I could do compositionally, which was a surprise.

“Scarlets of the Sands” appears on Vol. 1 of The Elements compilation project. How did you get involved with it?
Venus Aeon is a small indie label it's an offshoot of Latex Records and is run by TG Mondalf. He started following my project and he started posting about doing a compilation based on the five elements and invited me to participate and of course I said yes. It seemed like a great opportunity and I was really excited to write tracks specifically inspired by the elements. 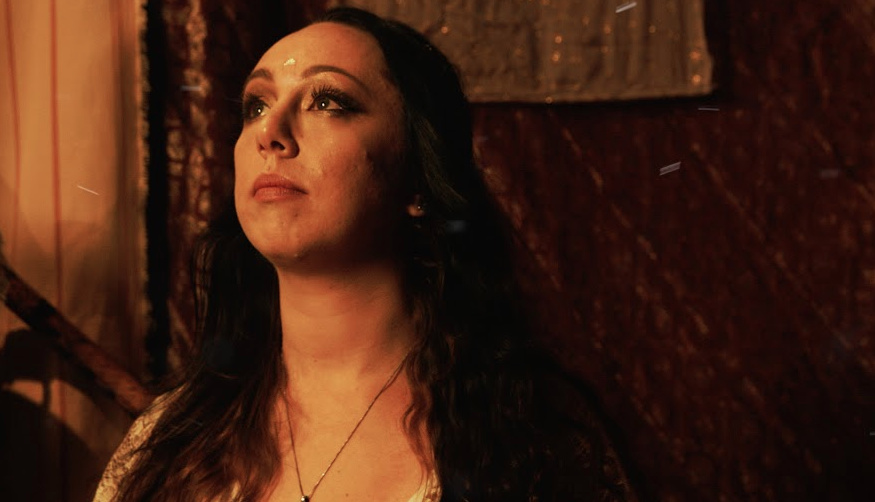 In terms of theme, what inspired you to compose “Scarlets of the Sands”?
When I was thinking about the element of earth, I found myself really inspired by two things. I had just seen a Father Murphy show here in Chicago, and because it was Easter season I found myself really inspired by the desert and the story of the biblical plagues in Egypt. All of that came together as the inspiration for this track. The desert has a really mysterious quality, with its ability to completely swallow up and bury the past—how it can literally make things disappear. Thinking about past lives and all of the things that I uncover when I write music, I felt that was a cool way to musically look at scars from your past that you're uncovering and digging up from the sand. I was trying to create a track that might emotionally express what it may have felt like to be alive during the time of the plagues

When we went to create the video I was lucky enough to work with a producer/director named Kate Soczka. During that process, I visited The Oriental Institute at the University of Chicago, which is a museum that has all kinds of artifacts from ancient Egypt, Persia, and Mesopotamia. I was like, "Oh my god, this is perfect." There were so many different relics from all different time periods all in one place and amazingly they allowed us to shoot there So the video is really just me uncovering different objects from different time periods in the sand which brings me back to memories from different past lives, some more positive than others.

The were lion’s heads from a processional walkway that led to the ancient gates of Babylon in 18th century B.C., ancient tablets from Isreal, pieces from The Book of the Dead, walls from an Assyrian king’s throne room where they held rituals before battle...

Just amazing stuff that I was allowed to work with. Being able to have those items in my video was just a treasure. It was incredible.